The record tab is where you really start with the app.  Here you record all of your lines, as well as the lines of the other actors who are near you.

As you record lines they will appear in the scene as shown here. 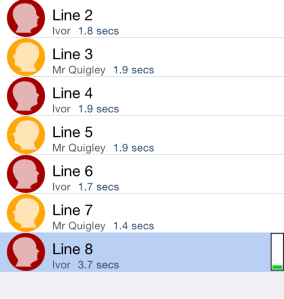 In this case I have already set up a couple of characters in the character list of the script, so it puts in the correct image and name. If you have not set up any characters then it will just put in Me and Them with default images.

The bar on the right is the recording volume.

When you stop recording the selected line will appear as follows

If you have multiple actors in your scene, then you can now assign individual lines to actors (instead of as before just have all other actors as them). This is particularly useful if you are sharing scripts, as that means that when you receive a script you just need to go to the Character screen and select which character you are and it will then know which lines to miss etc.

You can set this up in two ways, either by recording all the lines as normal using the ‘Record Me’ and ‘Record Them’ buttons, or you can record lines to the correct actor at record time. To do this first you need to set up the characters on the Character screen under the Script tab, and then on the Record screen turn on ‘Record multiple actors’ on the menu.

You will then see something like the following instead of the two record buttons.

To record a new scene you press the ‘New Scene’ button as below,

and if you have splitting of the script by days enabled then you can press the ‘New Day’ button to create a new scene in a new day. This button will appear next to the ‘New Scene’ button if enabled.

When you turn off stage direction the line will reduce in size so that it does not cause confusion, and will not be played. 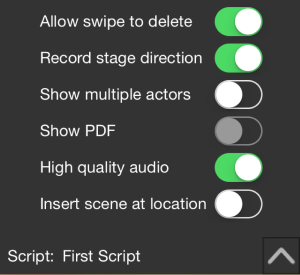 The menu gives you the following options