The script file that is shared will be called the same name as the script, but with a llz file extension.  This is a LineLearner script file, and can be loaded into LineLearner.

If you have a small script you can share via email, but if it is large you should use a file sharing app, for which we recommend AirDrop if both devices are on iOS 8 or later, or Dropbox if not.

On the share script screen it will initially assume that you are sharing all characters and all scenes as below.

If you don’t need to share everything you can reduce the amount that you want to share by either selecting just some characters, just some scenes, or both. Remember that if you only select some characters it may not make much sense when they import it if they are missing half the lines.  But, if you are exporting just your lines to send back to someone then that makes sense.

To share just certain characters press selected characters, and you will see the list of characters in your play similar to this.

You will need to select at least one character in order to enable the sharing buttons.

This will then give you a list of scenes in the script from which you can select. You will need at least one character and one scene selected in order to share.

When sharing you will normally have the options Share and Email at the bottom as in the top diagram. If you choose email then it will create your export file and open it in your email application ready for you to email.

The share button will only appear if you have an application on your device that is able to share files of this type. We recommend Dropbox for this. It is free, and can be used to share scripts, or to backup your scripts.

The menu bar contains the option Export for CD burning.

If you select this then the share button will change to an export to cd button. What will then be exported (or emailed) is a zip file that contains all of the audio files named in order that you can import into iTunes and burn onto a CD. 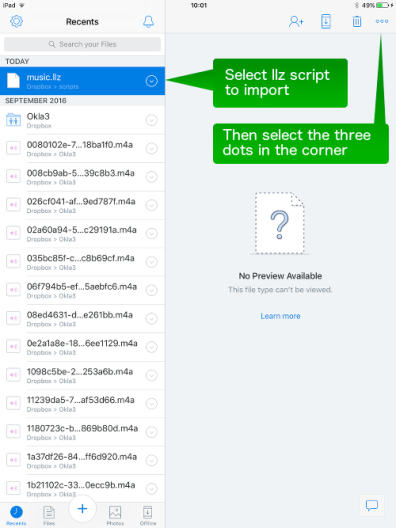 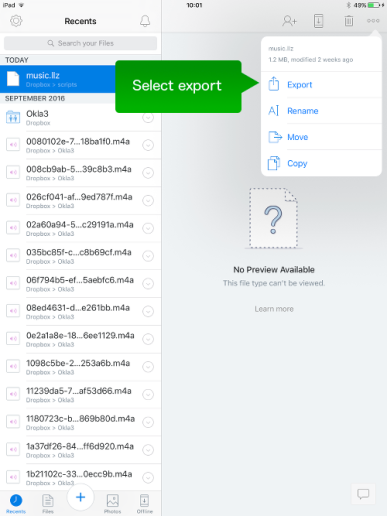 3) Select Open In… to get the list of applications 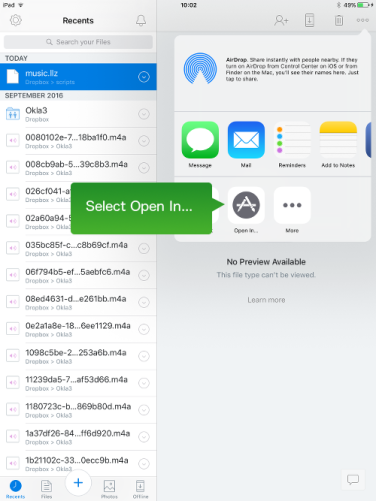 4) Select ‘Copy to linelearner’ from the list of apps

5) This should then switch to linelearner, and open it, after a short while it will have loaded the file and should give you the choice of what to do with it. If it is a new script not previously on the device then I recommend selecting Import as new script.

Airdrop is the easiest way to export between two iOS devices, as long as they are both on iOS 8 or later. You will need to have LineLearner installed on both devices before you start.

At the moment there is a bug with Google Drive which means that a file needs to have its file extension repeated before it will recognise an app.

If you file is called name.llz then rename it to name.llz.llz.

Once you have renamed it, select it from the list 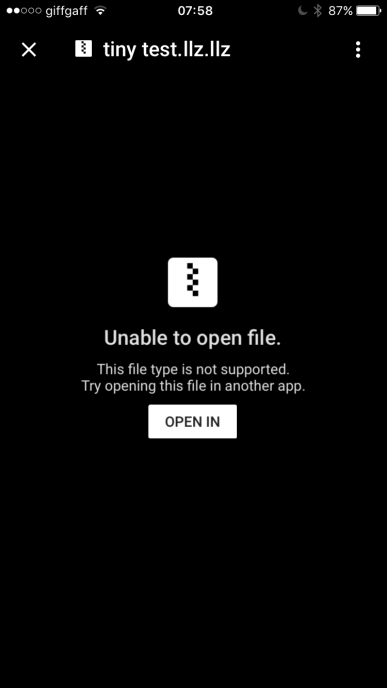 Then press the 3 dots in the top right 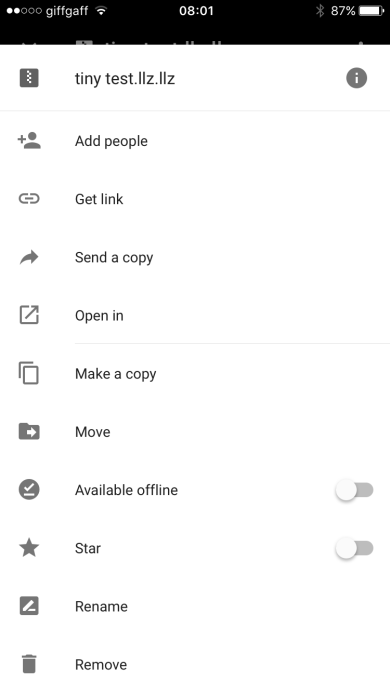 And select Open In

Importing from email is very similar to importing from other file sharing applications, and is done as follows.

3. Swipe along the list of applications to open the file. If LineLearner is there select it, otherwise select More.