What is the latest version of LineLearner?

The latest version of LineLearner is version 6.10.2

What is the latest version of LineLearnerlite?

The latest version of LineLearnerlite is 6.10.2

I am not currently aware of any bugs in the app. If you do experience crashes of the app please turn on automatic crash reporting in the linelearner section of the iOS settings app, and restart the app. This should then allow you to send the crash reports to me, either immediately or when it next crashes.

Where is the settings screen?

How do I insert a line I missed or move a line?

There are two ways to insert a line that you have missed.

The easiest way is just to select the line above where you want to missed line to be, and then record normally. It will record it just after the selected one.

If you have already recorded the line in the wrong location then you can go to the Scene screen (Script Page, Press the > for the script, Press the Scenes button), Then turn on Move/Copy and use the grab handle (three horizontal lines) on the line you want to move to position the line where you want it.

How do I learn monologues?

For monologues I would recommend splitting the script up into separate chunks of Your lines at natural breaks.  Then when you are learning the script you can use the A-B repeat loop functionality on the playback screen to learn small chunks at a time. You can build the number of chunks that you include in the repeat up until you are familiar with the whole monologue.

What is the sleep function and how do I use it?

The sleep function allows you to set a time after which LineLearner will stop playing. It is there so that you have the option to have your lines playing as you fall asleep, and they will turn off after a predetermined time.

To turn on the sleep function you need to go to the iOS settings app, and scroll down to the LineLearner section. There you will see a switch to enable the sleep function, as well as a slider that will set a time between 1 minute and 120 minutes.

How do I delete a script/day/scene/line?

Why is changing pitch disabled on the Character settings?

The ability to change the pitch of a character is a new feature introduced with iOS 8.  If you are currently running on iOS 7 then this feature will be disabled.

The altered pitch of the characters is too high/low. How do I change it.

The pitch adjustment can be found in the apple settings app.  Open the app, and go to the linelearner app.  There you will be able to adjust both the high and low pitches.

I can’t find where to change the line name or change whose line it is.

The line edit screen is available when you click on a line on the scenes page.  This is reached by drilling down under the Script tab. Select the ( i ) by the script name, and then click Scenes (or Days if you have days turned on, and then the scene) and then on the scenes page you need to turn on Show lines in the menu.

How do I move scenes/days?

How do I delete a scene?

There are two options depending on whether you have split script by days turned on or off.

If you don’t have your script split by days.

If you do have the script split by days.

How do I delete a line?

You can delete a line in two places.

On the Recording screen as follows

On the scenes screen

How do I change what I hear on playback?

The playback options are now in the menu on the play screen. As you select the different options from the Play and Order selection, and the Pause and Recap switches you will see the image change below, which shows you what you will hear.

For example, to hear just your lines and their lines you should have

You will then see an image with a green my lines and a blue their lines.

If you play around with the buttons you will soon get a feel for it.

How do I change the character for a line?

To assign lines from ‘them’ to an individual user you need to do the following.

1. Go to the script list screen
2. Select the script and press the >
3. Press the Scenes button
4. Press the line that you want to assign to a different character.
5. On this screen there will be a Change character for line, and you just need to press the new character.

If most of the lines are going to go to a single character then it may be easiest to move all of the ‘them’ lines to that character, and then move the other ones away.  To do this you

At step 3, Press the Characters button instead of the Scenes button
4. Select the ‘them’ character
5. Where it says ‘Give lines to’ press the character that you want to give all of their lines to.

Then go back to step 3 of the first set of instructions to move the other lines.

I have recorded my scenes in separate scripts – How do I join them together?

If you have each scene in a separate script then you can export the scripts (other than the one you want as the main one) and then import them again into linelearner and select to import them into an existing script. This will then add them to the bottom of that scene.

After you have done that it will probably have created duplicate characters, as it matches by a hidden id rather than name. Either you can leave them duplicated, or you can go to the character page and use the move lines to another character functionality to give all of the lines to just a single character of each name.

When you select a script in your email/google+/dropbox etc and choose to open it in LineLearner it will automatically take you to the import screens.

Why did my script duplicate when I imported it rather than over write my lines?

When you import a script it can only over write lines if it knows that they are the same. This works if you record a script, and then share it with a friend, who records their lines and sends it back.  Then their lines will replace the ones you recorded. If you both recorded it separately then you need to use the manual import to select which lines are replaced with which.

The exported script is too large to email

You have a couple of options here. Either you can use a file sharing site such as DropBox or Google+, both of which are free, or you can export the script chunks broken up by scene.

How do I load a PDF of my script?

Go to the location of your PDF (email/Google+/Dropbox/etc) and select to open it in LineLearner. When you have done this you should see the following button appear on the Recording and Playback screens.

How do I view my PDF?

The PDF is only visible from the Play and Record screens. To view the PDF either press the PDF button (above) or select Show PDF from the menu.

I can record audio but cannot hear it.

You need to give permission for the app to record audio. The phone should ask you when you first start the app, but sometimes it doesn’t depending on some settings on your phone.
You can change (and just check) this by going to the settings app on the phone, and then scrolling down until you get to linelearner. Select this and you will be taken to the screen where you can allow Microphone (the switch should be green), as in this image

If the options don’t appear there then you can also turn on and off access to the microphone is the Settings app under the Privacy section, and then under Microphone.  Here you should be able see line learner with a switch next to it. as in this image. 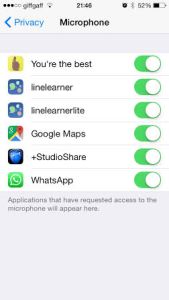 If that doesn’t work, then you may need to reset all of your privacy settings.

You can RESET your privacy settings in iOS Settings.